TODAY: On Wednesday 16 June, the VIII World Congress of Finno-Ugric Peoples will begin in Tartu, in the Estonian National Museum. Due to the COVID-19 pandemic, it is going to take place in a hybrid format. 14 Finno-Ugric peoples are going to participate in the World Congress which has a quorum if at least 11 peoples participate.

“A total of nearly 400 people are going to take part in the Congress, including 124 delegates and 224 observers, as well as guests and journalists,” says Helle Helena Puusepp, head of the organising committee.

Presidents of Finland, Hungary, Latvia, and Estonia welcome participants at the opening of the World Congress. The audience is also addressed by the Deputy Secretary of State at the Ministry of Human Resources of Hungary, as well as the Estonian, Finnish, and Russian Ministers of Culture.

According to Tõnu Seilenthal, representative of Estonians at the Consultative Committee of Finno-Ugric Peoples, the head organiser of the Congress, holding the event in extraordinary circumstances provides a unique opportunity to look towards the future.

“In a time when there has been many a spanner put in the works for Finno-Ugric peoples, we have kept going in spite of everything, and found new ways to be active. The hybrid congress with its online live streams is a very important experience for Finno-Ugric peoples. There is nothing to hold us back now, and it is precisely this joint activity that holds a new opportunity. I cannot help but feel a bit sad that our kindred peoples who are participating in the Congress virtually are not able to join in the joyful celebration that will take place in Tartu. Then again, this is a reason in itself to organise more smaller events with fewer participants more often in addition to the congresses. It is time to stop talking about mere ‘collaboration’ – now is the time for joint activities.”

In addition to the questions of preserving and transferring the languages, as well as problems resulting from bilingualism, working groups also address the impact of climate change on Finno-Ugric peoples, as well as the questions of cultural innovations. Important themes include the use of traditional and modern media channels and the application of innovative language technologies to raising awareness about Finno-Ugric peoples.

The opening ceremony taking place during the plenary session that starts on 16 June at 2pm (Schedule: https://fennougria.ee/en/event/opening-ceremony/) can be followed in three languages via ERR portals.

To commemorate the VIII World Congress of Finno-Ugric Peoples, Eesti Post is issuing postal stamps designed by Estonian artist Riho Luuse along with a first day cover and a special postage stamp. Eesti Pank is issuing a 2-euro coin for the Finno-Ugric peoples into circulation. The design of the commemorative coin features the stone age cave drawings from Äänisjärv showing the sun, the elk, the hunter and the water bird. The cave drawings of Äänisjärve appear on the UNESCO list of world heritage. The coin was designed by Al Paldrok and Madis Põldsaar.

Due to COVID-19 restrictions, the coin can only be purchased in Omniva online store. The postal stamp is presented and sold in ERM’s outdoor area on the opening day of the Congress.

In addition to the main programme of the Congress, a free cultural programme is also going to be held in Tartu (https://fennougria.ee/en/viii-world-congress-hosts-unique-cultural-experiences-in-tartu/). The Managing Director of the Fenno-Ugria Foundation Kadi Raudalainen says that the programme includes a number of special exhibitions at the Estonian National Museum, University of Tartu Library and elsewhere, as well as premieres of documentaries at the Electric Theatre, concert of chamber choir Collegium Musicale on Toomemägi, and an open discussion night in the garden of Tartu Loodusmaja along with the presentation of Fenno-Ugria’s Yearbook Finno-Ugric Knots 2020. A more detailed programme can be found on Fenno-Ugria’s website https://fennougria.ee/en/.

The social media hashtag for the Congress is #tartu2021fu

Decision of The VIII World Congress of Finno-Ugric Peoples

The VIII World Congress of Finno-Ugric Peoples, in order to develop further effective cooperation of the Finno-Ugric and Samoyed peoples, decided to hold the IX … 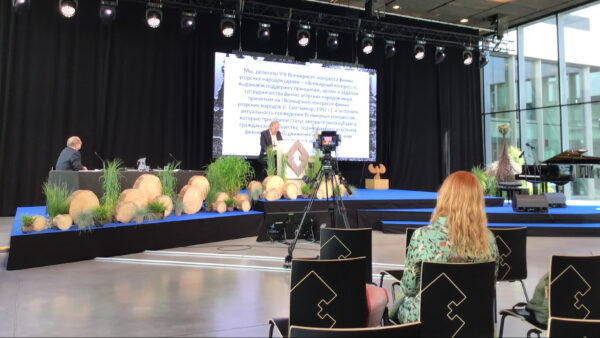