Komis populate sparsely a rather large territory in the northwestern corner of geographical Europe. They live mostly in the river systems of Vychegda and Pechora rivers, but also in the upstream of Mezen and Vashka rivers (so-called Udorans) and in the upstream of the Kama river (Komi-Permyaks). Their predominantly flat lands are mostly covered by coniferous forests (spruce, pine, fir, cedar pine). Farmlands are situated in the southern part while in the north Komi lands extend to the tundra.
Komi-Zyrians or Zyrians live in the Komi Republic (415 900 km2), with Syktyvkar (until 1930: Ust-Syssolsk) as its capital. In addition, Komis live in the Kola peninsula, Nenets Autonomous Region, Arkhangelsk Oblast and in several regions of Siberia. Komi-Permyaks live in the autonomous Komi-Permyak regional administrative unit which is only nominally autonomous, having been merged with Perm Oblast in 2005 to form Perm Krai.

According to the 2010 census, 156 099 Zyrians and 63 106 Komi-Permyaks lived in Russia (total 219 205), while in 2002 their populations were respectively 293 406 and 125 235  (total 418 641) and in 1989 respectively 336 309 and 147 269 (total 483 578). Population of both Komi branches has thus significantly declined, due to the ongoing demographic crisis in Russia and continued Russification.
According to 2002 census data, 87.4% of Komi-Zyrians and 64.1% of Komi-Permyaks lived in their autonomous regions. Komi-Zyrians formed 25.2% of the population of their titular republic while Komi-Permyaks were a majority (59%) in their autonomous region. After the dissolution of the Soviet Union, the percentage of indigenous people has somewhat increased in the Komi Republic, partly due to the out-migration of some of the Russian-language industrial workforce.
More than half of the residents of the Komi Republic are Russians, in addition to Ukrainians and Belarusians. In cities, especially those established since the 1930s in the North (Vorkuta, Inta, Pechora, Ukhta), the Russian-language population dominates. Ethnic Komi positions are stronger in agricultural rural areas, however urbanisation usually leads to Russification. Since the 19th century Komi-Zyrians also live in the Kola peninsula, Western Siberia and elsewhere.

The Komi language belongs to the Permic group of Finno-Ugric languages. The closest kindred language is the Udmurt language of the same group. The Komi language is divided into two main dialect groups (northern or Komi-Zyrian and southern or Komi-Permyak) which, according to Russian (Soviet) tradition, are viewed as two close kindred languages.
According to the 2002 census the proportion of native speakers among both Komi-Zyrians and Komi-Permyaks was 71%. Komi-Zyrians and Komi-Permyaks are closely related and after some getting used to also mutually intelligible. A common written language would be entirely possible if tere was political will.
Komi written language traditions extend to the 14th century. Specifically, the famous Orthodox missionary Stephan of Perm began using a special Old Permic writing system to which he translated religious texts. Old Permic written languages was in use until the 17th century, after which it was taken over by the Church Slavonic language. Already at the end of the 18th century religious literature and in the 19th century also secular literature began to be translated into Komi, however in Cyrillic alphabet. Translations were made into different dialects. Several Komi nationalists (in particular, Georgi Lytkin) worked to develop a unified Komi written language, adding a few additional characters to signify Komi phonemes. In the Soviet period, separate written languages were created for Komi-Zyrian and Komi-Permyak languages.  Latin alphabet was temporarily used in the 1930s, after which Cyrillic alphabet was reinstated.
Komi language is alongside Russian an official language of the republic, but in reality Russian continues to dominate in the public sphere. There are no Komi-language schools in the republic, in so-called ethnic schools the Komi languge and literature are taught as subjects. Komi-language programmes in local digital media have a 20-30% share while Komi-language print media and book circulations have significantly declined sine the Soviet period. The official language of Komi-Permyak ethnic administrative unit is Russian and the positions of the Komi-Permyak language in the public sphere and media are even worse than those of the Komi-Zyrian language.

It has been suggested that the population speaking Permic languages inhabited the Kama and Vyatka river systems. Ancestors of Komi-Zyrians migrated out from there at the end of the first millennium, possibly as a result of Bulgar pressure, to the Vochegda basin. In Russian chronicles ancestors of Komis (perm’) were first mentioned in year 967. Already at the end of the 11th century the Komi-Zyrian territory became dependent on Novgorod. Novgorodians’ warriors were occasionally collecting taxes in Komi lands, with a special interest in furs. At the end of the 14th century Stephan of Perm succeeded in converting Komi-Zyrians via missionary work in Komi language to the Orthodox faith. This meant coming under Moscow’s influence. In 1478 the Permian bishopry established by Stephan was formally annexed to the Grand Duchy of Moscow. In the second half of the 15th century also the Komi-Permyak territory (Perm Veliki) was Christianised and annexed to Moscow.
In the 19th century Komis were mostly an illiterate peasant people. However, there were still clerics, merchants and educated folks, while Komi-Permyaks were almost exclusively peasants. In the second half of the 19th century first Komi nationalists (Georgy Lytkin, Ivan Kuratov, etc.) emerged. They began to explore the history of Komi lands, collect and study folk poetry and develop the Komi written language. Ethnic policy of the Russian Empire did not favour their activities due to the Russification policy.
The 1920s were very favourable towards ethnic cultural development due to the indigenization or korenizatsiya state policies. A Komi-language educational system, media and much more was established. Unified Komi autonomy, however, did not materialise, despite the wishes of nationalistic Komi elite. In 1921, Komi autonomous oblast (since 1936, Komi ASSR and since 1992, Komi Republic) were established and in 1925 the Komi-Permyak autonomous regional unit was formed. In the 1920s and 1930s, agricultural collectivisation was executed which was followed by repressions against the nationalistic intelligentsia.
The late 1930s witnessed an extensive industrialisation of Komi ASSR. Coal, oil and gas industry with corresponding infrastructure was established, largely through forced labour. Industrialisation led to an extensive inflow of workers. Komis, who had maintained an absolute majority in their autonomous region before World War II, rapidly became a minority. Komi-Permyaks were less affected by these developments because their region’s economy was dominated by forestry, supplying the Ural industrial area with timber. After World War II Komi lands were slowly but consistently Russified. Komi language was pushed out from the public sphere and it became primarily a rural spoken language with a low social status. Ethnic mixed marriages became widespread and children from such families usually grew up as Russians due to dominant social norms.
As a result of Soviet Union’s dissolution processes, Komi nationalist thought activated in the 1980s, parallel to a rising national consciousness. National-cultural associations (such as Komi-Zyrian Komi Kotyr and Komi-Permyak Yugör) were established. In January 1991, the first Komi People’s Congress was held in Syktyvkar and a committee of Komi national rebirth was created as its executive arm. Komi People’s Congress was meant to operate as a representative body of the Komi people (also Komi-Permyaks are included) which meets every 2 years and represents Komi interests.  Also some radical parties (Doryam Asnjamös, Komi Stav) emerged, however they have remained marginal and their access to mass media is blocked.

The main traditional Komi livelihood of is (land) farming. Animal husbandry has been of secondary importance. In addition, hunting and fishing has historically been important, especially in the northern regions. Komi-Izhmas have engaged in dairy cattle husbandry and since the middle of the 19th century also in reindeer herding. Forestry has been an important source of livelihood for Komis since the 19th century, and modern economic sectors since the 20th century.

Since the 14th-15th centuries Komis have been predominantly Orthodox. There are also some Old Believers in the Komi periphery (Pechora, Vochegda river upstreams). Pre-Christian beliefs among Komis are rare. 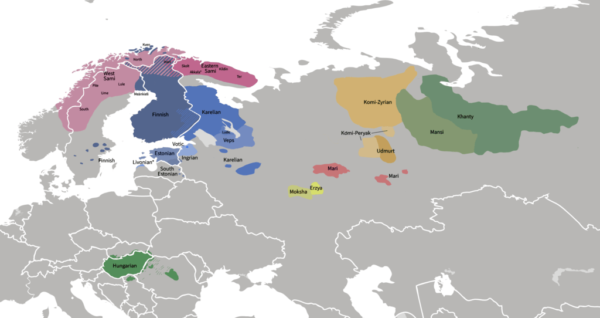