The Saami homeland reaches from Central Norway and Sweden through the northernmost part of Finland and into the Kola Peninsula.

The Saami (“sapmelas” in Saami) are one of the indigenous peoples of Europe, just as the Inuit in Greenland. There are over 75 000 Saami. They have their own history, language, culture, livelihoods, way of life and identity. The Saami homeland reaches from Central Norway and Sweden through the northernmost part of Finland and into the Kola Peninsula. Thus, Sapmi covers areas belonging to the states of Norway, Sweden, Finland and Russia.

In Finland, Norway and Sweden a person is considered a Saami if she or he regards herself or himself a Saami and has at least one parent or grandparent that learned Saami as her or his mother tongue. More than half of the Saami speak Saami. There are several Saami languages and the Saami speaking the different languages generally can not understand each other. In Finland, Norway and Sweden North Saami, or Mountain Saami, is the main Saami language.

In Norway there are more than 40 000 Saami, in Sweden 15 000 – 2 5 000, in Finland 6 500, and in Russia 2 000. In Finland, Sweden and Norway the Saami elect from among themselves a representative body which has advisory status. In Norway and Sweden reindeer husbandry and its affiliated occupations are an exclusive right of the Saami. Finnish law no longer grants the Saami exclusive right to their traditional livelihoods. In Finland and Norway Saami may use their own language with authorities.

In the declaration of the 18th Saami Conference is stated for example:

Most Saami in Russia live in Murmansk Oblast. There are also some Saami living elsewhere in Russia but most of them live in the Nordic countries. The Saami are a minority in Murmansk Oblast, making up only 0.15 % of the whole population according to the all-union census of 1989. In 2002, there were 1991 Saami in Russia, further declining to 1771 by 2010. The number of Saami language speakers decreased from 785 in 2002 to 353 in 2010, thus reflecting fast language and cultural assimilation of Russia’s Saami and making Saami language one of the fastest disappearing Uralic languages in Russia.

They live mostly in the eastern parts of the Oblast, in Lovozero rayon, but there are also some small groups of Saami everywhere in the Murmansk Oblast. The Saami are a minority also in Lovozero rayon, and most of them (66.3%) live in rural areas.

Today the Saami have the status of indigenous people at the Russian Federation level as well as at the regional level. The Saami belong to the so-called small-numbered indigenous peoples of the North, Siberia and the Far East at the federal level. Also in the legislation of the Murmansk Oblast, the Saami are recognised as an indigenous people.

The ethnic identity of the Saami is very much connected with their language and reindeer herding. Among the Saami people living in the Murmansk Oblast, there are several Saami languages (or dialects): Skolt (Notozero), Akkala (Babino), Kildin Saami and Ter (Iokanga) Saami. Most of the Saami speak in Kildin Saami (800 speakers). Only a few persons nowadays speak Akkala and Ter Saami languages.

According to the all-union census of 1989, only 42.2% of the Saami considered Saami language as their native language. There is a great danger of language loss among the Saami in Murmansk Oblast. During the Soviet era no education in the Saami language was provided in schools. Today in the village of Lovozero there are Saami lessons in the school (Kildin Saami), but the language of instruction is Russian. Many Saami parents do not speak their native language at all at home. There are also a great number of inter-ethnic marriages among Saami, which also makes it difficult to use Saami language daily at home.

There are obligatory Saami lessons in the boarding school in Lovozero, but in the other schools the lessons are voluntary. Also in the vocational school of Lovozero, the students have a possibility to attend Saami lessons. In Lovozero it is possible to listen to Saami language radio broadcasting, but it is not an official language and it cannot be heard everyday. Today there are some books for children in Saami and also a few writers, who write in Saami language. But there are not many books in Saami language and not enough books about local culture and history even in Russian. In other villages, where the Saami live, there are no Saami lessons at schools at all.

The self-confidence of the Saami is increasing today: they have their own organisations, the first of which was organised in 1989 and the second one in 1998. There are also separate organisations for the Saami youth, women and craftsmen. In 1994, an ethno-cultural centre was established in Lovozero village, where Saami and Komi craftsmen work and give courses of handicraft in order to revive old skills and knowledge. The centre also organises Saami language courses. There are also a few Saami folkdance groups, which use the centre as their home base. In the 1990s, the Saami re-established contacts with other Saami living in the Nordic countries, which has had an impact on their self-identity. During the Soviet times these contacts were not possible at all.

The Saami culture has very much been connected with reindeer herding. At the beginning of the 20th century the Saami people on the Kola Peninsula lived from reindeer herding, fishing and hunting. Soviet collectivisation and industrialisation changed the situation. Reindeer herding is no longer the only livelihood of the Saami, and many of them work in other fields nowadays. However, reindeer herding is still an important livelihood for the survival of the ethnic identity of the Saami, and all of them are concerned about the problems of reindeer herding. The herders still work in co-operatives and have difficulties in organising their work and production under today’s circumstances. The industrialisation of Murmansk Oblast has decreased available pastureland during the past decades, and this tendency is still continuing.

The Saami have had problems with other kinds of nature exploitation as well, namely tourist fishing, which has meant that the Saami have lost their right to fish in their native territory. Although, according to the regional legislation, the Oblast administration should defend the rights of the Saami, people feel that they have been forgotten.

The unemployment rate is high and the education level low among the Saami. Their number has not changed very much during the 20th century, but the number of Saami speakers has decreased. According to the 1989 census, for example, the death rate among the Saami was 2.4 times higher than among other people in the Murmansk Oblast. 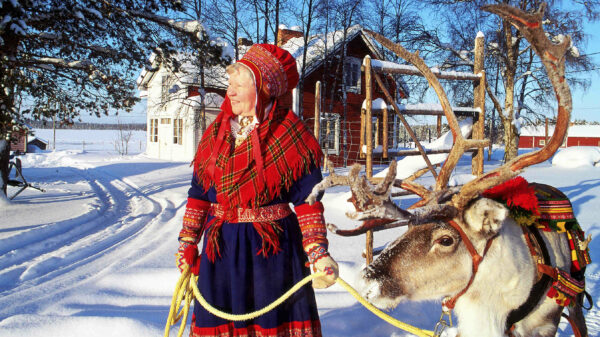 Who are the Sámi people? Meet them on their National Day

The only indigenous people of the European Union are mostly unknown throughout the world. Read in this article about their origin, customs, and the discrimination …