Arcticcentre.org: Roza Laptander defended a theses about silence in the University of Lapland. Her dissertation is based on the stories of the Nenets reindeer herders from the Yamal peninsula, Western Siberia.

It shows that spoken stories and interviews concerning big changes on the tundra reflect a general mechanism of making Nenets official historical narratives. Through analysing silence in the example of the Yamal Nenets people stories, Laptander studied the role of silence and silencing offering a new approach to understanding how small indigenous societies keep memories and stories about their past.

The Nenets represent the largest community of Uralic language speaking indigenous northern people of the Russian Federation. The spoken history of the Nenets includes individual life stories, personal biographies, stories about relatives, friends, and neighbours, historical narratives, individual songs, stories of songs and people who made these songs, and collective narratives. There are single narratives, dialogues, group talks, discussions, and different versions of a single story told by many people.

In general, all of these stories represent the Nenets’ past from the beginning of the 20th century until today. This elucidates how the Nenets society maintains oral history stories and narratives about past and recent events in the tundra that live in both individual and collective memory.

– The Nenets transmit their historical narratives, traditional knowledge, and personal experiences about the past from one generation to another not only through spoken stories, but also by leaving some things unspoken, explains Laptander.

However, the Nenets custom of silencing – the act of keeping certain information unspoken even when it is still significant – can have different backgrounds.

The principal result of this study made it possible to identify the mechanisms of how individual and collective memories about the past and recent history are saved within Nenets society and the meaning of silence and silencing during narration. It can be connected to the Nenets cultural custom of silencing some narratives and helps to bring out memories about the Nenets past and their special meaning in people’s lives.

The Nenets can use silence for keeping important information safe as shared knowledge with open, restricted or closed access, for remembering it, or for forgetting it. However, the informative role of silence during communication depends on demands and interests emanating from within Nenets society. Moreover, the dominant Soviet and later post-Soviet Russian culture also influenced the role of silencing among the Nenets.

Therefore, the author of the dissertation described three types of silence common not only to the Nenets, but perhaps also to other people of the former Soviet Union and indigenous peoples of the Arctic. These three types of silence illustrate the roles of responsibility, demands and interests of society, and the political regime of the country.

This doctoral research brings new insights into the influence of state norms and politics on indigenous people, which is illustrated here from within an indigenous society. Thus, this particular work also develops one possible way of understanding the importance of silence and silencing in the oral history of human societies in general.

Information on the candidate

Roza Laptander holds a degree of “Candidate of Sciences” from the Herzen State University in Saint Petersburg, the Russian Federation. She is a member of the Anthropology Research Group/Global Change Research Group of the Arctic Centre and works in various joint projects of the Arctic Centre and the University of Lapland in Rovaniemi. Her research interests deal with sociolinguistics, linguistic anthropology, the Nenets language documentation and oral history of the Western Siberian Nenets. In her research, she addresses the Nenets reindeer herding communities and their present life in the Yamal tundra.

Information on the publication:
Roza Laptander: When we got reindeer, we moved to live to in the tundra: The Spoken and Silenced History of the Yamal Nenets. Acta electronica Universitatis Lapponiensis 278. University of Lapland Printing Centre, Rovaniemi 2020. ISBN 978-952-337-200-9. ISSN 1796-6310

Permanent address of the publication: https://lauda.ulapland.fi/handle/10024/64168 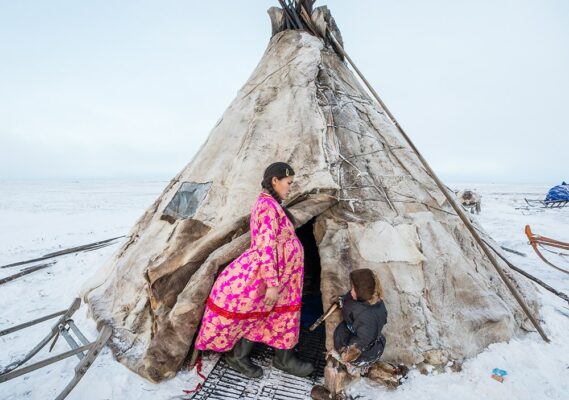 Documentary photographer Alegra Ally has dedicated her life to telling the stories of indigenous people around the world. Since she was a teenager, she has spent time …