Speaking at the opening day of the VIII World Congress of Finno-Ugric Peoples Wednesday, the president said: “Our common concern, first and foremost, is that of the Finno-Ugric peoples with regard to statehood, and must be the promotion and preservation of indigenous languages,” Kaljulaid said in her opening speech, attended by the heads of state of Finland, Hungary and Latvia.

“The world congresses have been building bridges between our peoples for almost 30 years,” she added, noting that influence of dominant languages puts the identity and survival of smaller ones at risk and, citing statistics from the UN Permanent Forum on Indigenous Issues to back up her statement.

The forum says one indigenous language vanishes every fortnight, adding that a disappearing language means a nation at risk.

The congress runs for two more days, and is being hosted by Estonia, at the national museum (ERM) in Tartu. Most attendees are taking part remotely, though delegates, representing virtually all Finno-Ugric nationalities and ethnic groups – nearly all of whom lack sovereign statehood or sufficient national self-determination, a state of affairs which Kaljulaid and Estonia have long been lobbying to redress.

Estonia, Finland and Hungary are the only sovereign, Finno-Ugric majority nations – Latvia is home to a minority via its Livonian (Liivi) community and linguistic group – while Estonia was under Soviet occupation until thirty years ago, Hungary was part of the Warsaw Pact bloc and suffered a Soviet invasion in 1956, and Finland lost a substantial amount of territory to the same power at the end of World War Two, and had to pursue a strict policy of neutrality during the cold war.

The majority of the remaining Finno-Ugric groups can be found distributed across a vast swathe of terrain in northwestern Russia and in northern Scandinavia.

All Finno-Ugric nationalities, regardless of numerical strength or sovereignty status, are treated as equals to one another within the context of the congress, the president said.

The president continued that: “Especially at this present time, when our kindred peoples have to worry about school education in their mother tongue, the future of the written word in their own language, the reckless exploitation of natural resources and their rights as indigenous peoples. But we know, and we want to believe, that they too know that no one is alone in this concern, and that we can turn a common concern into a common hope.”

Continuity for future generations is key, she added, while the Finno-Ugric congresses provide an ideal forum to do this, and would also foster better understanding of how each group fits into the whole, leading to better cooperation and protection of language and culture.

The VIII World Congress of Finno-Ugric Peoples continues Thursday and Friday, while some sessions will be live-linked, with simultaneous translation into English, by ERR News.

Russian president Vladimir Putin had last year been invited to the event, though the deteriorating diplomatic situation vis-a-vis Russia and the west led to many original delegates not attending in person, though as noted remote-linked participation has been the majority means of interacting in any case. 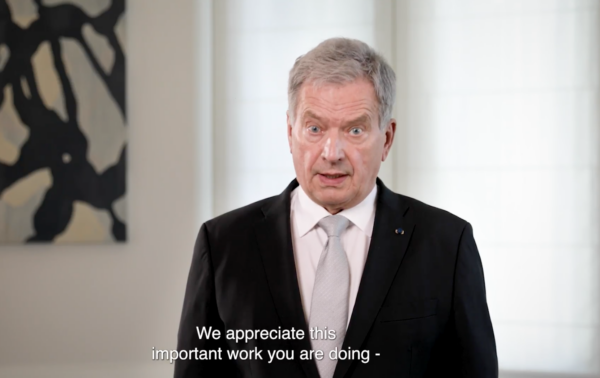 Video greeting from President of the Republic Sauli Niinistö